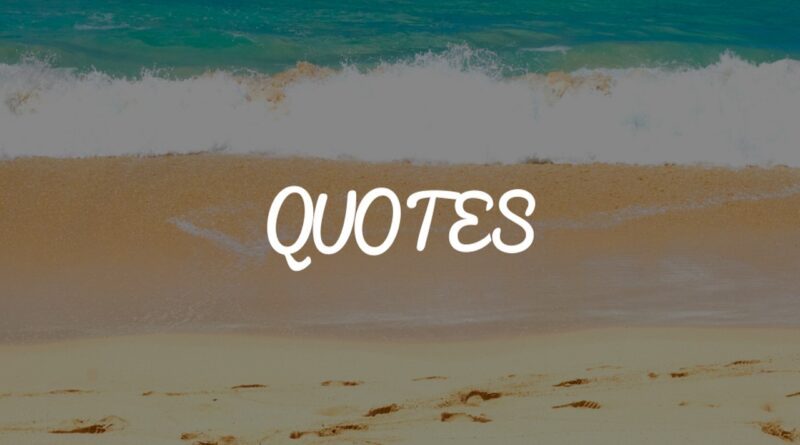 Often the magic in life happens in places where you are least expecting and in ways you could have never thought of !

Because you will never know what you are seeking, until you come face to face. You may dream of things in a filmy way, but when her touch will mesmerize you and her talk will ring in your ears, you will know that you have been running behind something unnecessary while the whole time someone else was made for you !

You never know the next moment how things will be

Be open for life to make you beautiful.

Give your life a chance to make you happy !

The roughness of life, rubbing against your skin, you are bound to grow tougher !

The seeker will always be faced with what he is seeking.

I melt in your love to become the carpet under your feet !

If you can keep your things organised your life will de-clutter.

We all learn to live with pain
Sometimes mild
Sometimes severe!

There is one person in the group who comes to the beach but doesn’t step into the water !

In my heart there is a little heartbeat that is yours.

However hard I want to fight with you,
inside of me drop all the guards and weapons,
which leaves me with nothing
to fight with and fight for !

We all struggle in our own created world !

We all learn to leave with a broken leg, which isn’t actually broken !

If someone doesn’t behave like a grown up, you have no responsibility, don’t take on yourself.

Once you realize that there are preferences of people and they can be different from your own – you will be a complete human.

We are so lost in making life that we forget to live life.

When we work hard, all the unnecessary drag about life is lost.

Faith is the bird that feels the light when the dawn is still dark.

You can’t cross the sea merely by standing and staring at the water.

The butterfly counts not months but moments, and has time enough.

Death is not extinguishing the light; it is only putting out the lamp because the dawn has come.

Facts are many, but the truth is one.

Everything comes to us that belongs to us if we create the capacity to receive it.

Every child comes with the message that God is not yet discouraged of man.

Depth of friendship does not depend on length of acquaintance.

Love does not claim possession, but gives freedom.

A mind all logic is like a knife all blade. It makes the hand bleed that uses it.

ABOUT GRIEF BY TAGORE

Say not in grief that she is no more
but say in thankfulness that she was.
A death is not the extinguishing of a light,
but the putting out of the
lamp because the dawn has come.

WHERE THE MIND IS WITHOUT FEAR BY RABINDRANATH TAGORE

Where the mind is without fear and the head is held high;
Where knowledge is free;
Where the world has not been broken up into fragments by narrow domestic walls;
Where words come out from the depth of truth;
Where tireless striving stretches its arms towards perfection;
Where the clear stream of reason has not lost its way into the dreary desert sand of dead habit;
Where the mind is led forward by thee into ever-widening thought and action
Into that heaven of freedom, my Father, let my country awake.

Epictetus (c. 55 – 135 AD) was a Greek Stoic philosopher. He was born a slave at Hierapolis, Phrygia(Turkey). His teachings were written down and published by his pupil Arrian in his Discourses and Enchiridion. Epictetus taught that philosophy is a way of life and not just a theoretical discipline. To Epictetus, all external events are beyond our control; we should accept calmly and dispassionately whatever happens. However, individuals are responsible for their own actions, which they can examine and control through rigorous self-discipline.

We have two ears and one mouth so that we can listen twice as much as we speak.

It’s not what happens to you, but how you react to it that matters.

First say to yourself what you would be; and then do what you have to do.

No man is free who is not master of himself.

Men are disturbed not by things, but by the view which they take of them.

Only the educated are free.

Know, first, who you are, and then adorn yourself accordingly.

There is only one way to happiness and that is to cease worrying about things which are beyond the power of our will.

He is a wise man who does not grieve for the things which he has not, but rejoices for those which he has.

The key is to keep company only with people who uplift you, whose presence calls forth your best.

Somethings are up to us and some are not up to us and we must act accordingly, taking responsibility for planning and enacting what we can with virtue without becoming upset or disheartened by obstacles and reverses beyond our control.

Luck is what happens when preparation meets opportunity.

Every new beginning comes from some other beginning’s end.

Religion is regarded by the common people as true, by the wise as false, and by the rulers as useful.

If one does not know to which port one is sailing, no wind is favorable.

Sometimes even to live is an act of courage.

We are more often frightened than hurt; and we suffer more from imagination than from reality.

There are more things, Lucilius, that frighten us than injure us, and we suffer more in imagination than in reality.

One of the most beautiful qualities of true friendship is to understand and to be understood.

A sword never kills anybody; it is a tool in the killer’s hand.